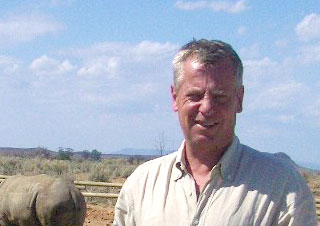 Graeme is a keen traveller, sports player and was constantly promoting the work of WWF via personal support and through various mediums. Graeme originally studied economics and business studies. He then moved into retail management forging a successful career at Habitat and Harrods to name a couple. In his late twenties he moved into financial services where he built a successful practice in a prestigious FTSE 250 company.

After a successful 24 years, Graeme decided to sell his practice, which has enabled Graeme and his wife to be in a position where they can go and pursue a dream of helping wild animals from extinction.

After a lot of deliberation they have decided the  South African Rhino, a big 5 icon, is currently the animal most under threat and have decided to dedicate their time in raising peoples awareness of their plight.